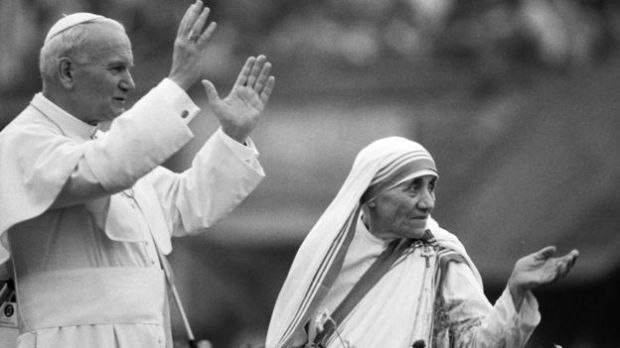 Last September, Agnes Gonxha Bojaxhiu (more favourably known as Mother Teresa) was canonised by Pope Francis before tens of thousands of adoring fans, despite the controversial and injurious legacy she left behind. One cannot blame her supporters for their ignorance about her dangerous shortcomings—she was after all consistently displayed by the media and the Church as a compassionate samaritan who devoted her life to serving and assisting the poor, attracting a universal admiration which, as Hitchens put it, “few have since had the poor taste to question”.¹ But what of her numerous views and actions which acted as bottlenecks in the processes of peace and secular humanity? Remarkably, but not surprisingly, they all seem to have either been forgotten about, or become encompassed by the blanket of corrupt misrepresentation and hyperbole which surround her character. In addition to this, certain more questionable aspects of Bojaxhiu’s crusade have somehow developed into a source of much contemptible praise from many of those whom she manipulated with her fraudulent demeanour and unwarranted political influence. An example of one such aspect, and one which I find to be especially dangerous and short-sighted, is her stance on the use of contraceptives. I wish not, however, to focus this discussion on the sexual advice of this particular virgin, and would rather steer it towards the institution from which these views originated: Holy Mother Church.

What does the Catholic Church say about contraception?

The Catholic Church, failing to follow the reasonable example of more morally malleable Christian denominations, has long exhibited an almost absolutist opposition to contraception, which is not only a dangerous stance, given the worsening problem of AIDS in both developed countries and the third world, but also (characteristically) illogical. The Church believes that artificial birth control is inherently wicked and sinful, and despite Pope Francis’ statement in early 2016 that condoms may be permissible in response to the Zika virus epidemic (yet peculiarly not the AIDS epidemic), he was sure to stress that this was still only the lesser of two “evils” (the other being abortion).² Many Catholics subscribe to the notion that the use of condoms or other contraceptive methods is equally as unforgivable and deplorable as abortion, something once described as “the greatest destroyer of peace” by Mother Teresa herself.³ An odd remark, I find, given how famously familiar she was with the appalling prominence of modern poverty in the third world, surely a more deserving target for such a decisive assertion.

So what is the reasoning behind the condemnation?

My reflections on Saint Teresa aside, it is my firm belief that the Catholic Church’s condemnation of artificial birth control is markedly unreasonable and inimical to those in the third world who are suffering under its influence. Inimical because here is being displayed a stark rejection of the single most effective method through which to reduce STDs among sexually active people, and unreasonable because the opinion is grounded on fundamentally defective logic. If you ask a Catholic to explain the reasoning behind their hostility towards contraceptives, there are two common arguments which are usually presented in response:

Of course the Bible naturally does not make reference to modern contraceptives, as they were not yet available at the time of its writing. (One would have thought that an omniscient god might have seen them coming, but that’s a discussion for another time.) Where, then, is the Biblical foundation for the views of the Catholic Church regarding birth control? Well, we need to venture no further than the book of Genesis for scriptural reassurance of the official Catholic position:

“Then Judah said to Onan, ‘Sleep with your brother’s wife and fulfil your duty to her as a brother-in-law to raise up offspring for your brother.’ But Onan knew that the child would not be his; so whenever he slept with his brother’s wife, he spilled his semen on the ground to keep from providing offspring for his brother. What he did was wicked in the Lord’s sight; so the Lord put him to death also.” (Genesis 38:8-10)

There are two problems regarding this excerpt however. Firstly, it goes without saying that the Bible is not the most reliable source of practical ethical guidance. If religious scripture had included explanations as to why certain things are good or evil in such a way that did not necessitate the invocation of a supernatural deity then its moral teachings might have had a leg to stand on—if, for instance, God had laboured to explain the reasoning behind his commandments rather than simply stating them as unquestionable orders, even a non-believer may have been able to sympathise with their values—but unfortunately, this sort of clarification within the Bible is a rarity.

Secondly, it is unclear as to whether God was angered by Onan’s enactment of coitus interruptus or by his reason for doing so. It is very possible that God was punishing Onan for his refusal to accept Judah’s proposal rather than for the specific actions through which he prevented conception.

2) “Contraception denies the potential for procreation.”

The reason why this argument is so popular and often difficult to respond to is that it is absolutely true. By using contraceptives, you are actively removing the possibility of fertilisation occurring, and therefore preventing the conception of new life. The problem is that arguments of this kind focus their attention in the wrong place; it’s not about whether or not contraceptives refuse the potential for fertilisation, because they evidently do—it is instead about whether this is moral, immoral, or ethically neutral.

To summarise: yes, contraceptives disallow the inception of life, but the denial of creation is not the same thing as destruction, and so cannot be reasonably looked upon with an equivalent distaste. The Catholic Church needs to get with the times and alter its approach to birth control, even if just to rectify the awkwardly contradictory ethical principles vocalised by its leader. Whatever the case, I can only hope that it happens soon.

1. Hell’s Angel. Dir. Jenny Morgan. Perf. Christopher Hitchens. Channel Four Television Corporation, 1994.
2. Pope Francis said this to reporters on a flight from Mexico to Rome in February 2016.
3. This was said by Bojaxhiu at the 1994 National Prayer Breakfast in the presence of Bill and Hillary Clinton.